Showing posts with the label neutrino
Show all
September 26, 2011 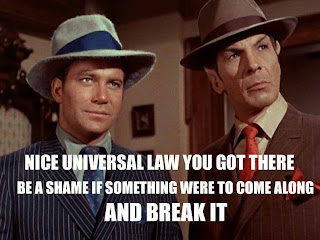 (Reuters News) – A team of Vatican scholars said Thursday they had discovered early church manuscripts that REQUIRE priests, cardinals and even the Pope himself to be married -- a finding that could overturn a long-accepted fundamental canon of the Catholic Church.

(Reuters News) - An international team of scientists said on Thursday they had recorded sub-atomic particles traveling faster than light -- a finding that could overturn one of Einstein's long-accepted fundamental laws of the universe.

That’s the difference between religion and science. If science finds something new they go out of their way to talk about it. Now this new finding hasn’t been substantiated. They certainly haven’t gotten past the first rule of science (according to the movie Altered States) repeat the experiment. They need to get into the sensory deprivation tank a second time and see if they turn all sparkly AGAIN. This might end up being nothing. The math might …
Post a Comment
Read more
More posts