Showing posts from June, 2010
Show all

BARACK OBAMA IS NOT GOING TO GET INVOLVED WITH THIS EMERGENCY, AND THAT’S A GOOD THING 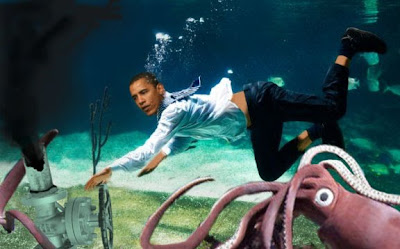 I know what you’ve been feeling. The president should do something about this oil spill. He should personally take charge of the capping effort. You imagine Barack Obama on a Naval destroyer. His one hand grasping the rigging, leaning past the bow of the ship, his other hand shading his eyes, as he scans the watery horizon for any sign of the source of the oil. When the ship finally arrives at the epicenter of the disaster, the President has already stripped down to a bathing suit, in preparation for what everyone knows he must do. Executing a perfect swan dive, he plunges into the thick black whirlpool, a large shark knife clenched between his teeth.

Ok, maybe that’s not what you are imagining. I don’t know. You are going to have to work out all that homoerotic fantasizing yourself. I can’t help you. Either way, you need to accept the idea that Barack Obama is not going to get involved with this emergency, and contrary to what you’re feeling, that’s probably a good thing.

AND TO THINK, JUST MOMENTS BEFORE, I WAS STANDING UNDER THAT VERY TREE PRAYING TO A FALSE IDLE 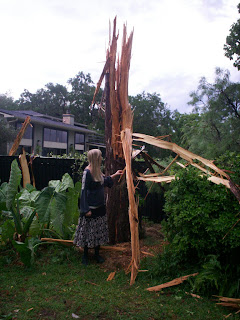 A lightning strike, recently, in by backyard, completely obliterated one of my cypress trees. Was this the act of an angry god, punishing me for being an Atheist? Was it like the time the almighty sent a hurricane to Orlando to punish us for Gay Days but missed Disney? What about the time he tried to punish New Orleans for their debauchery, but missed Bourbon Street? I’ll say one thing for God; he sure is a lousy shot.
1 comment
Read more
More posts